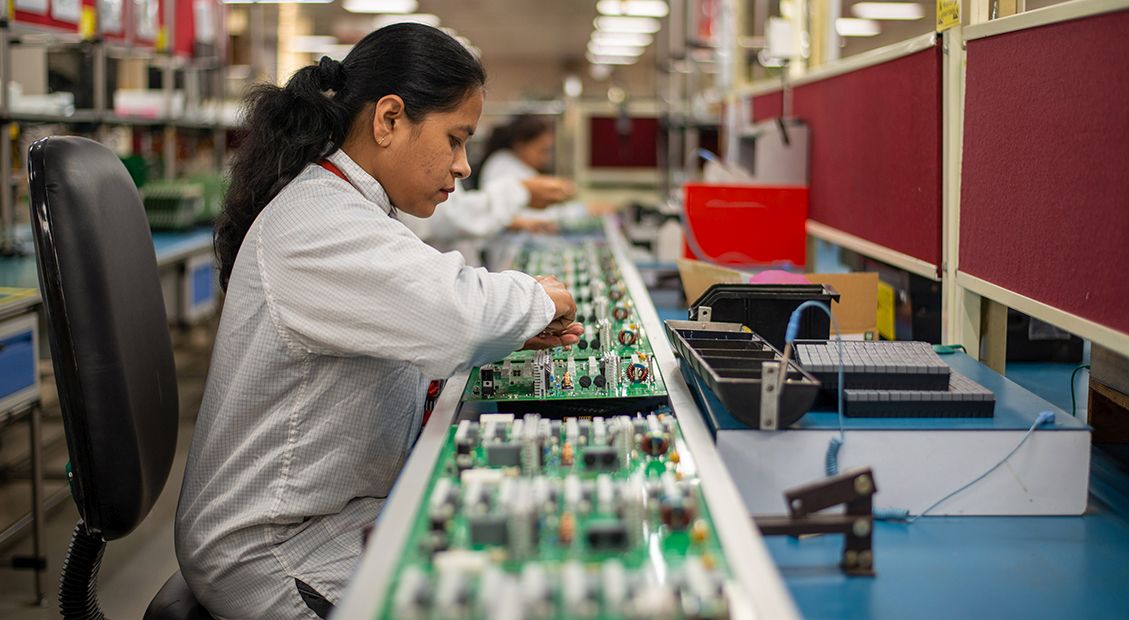 Industrial producers or manufacturers worldwide will need to adopt new equipment, machinery and technologies, ranging from energy-efficient solutions to bio-energy and carbon capture/utilization/storage solutions by 2050. This will cost about USD50 trillion in incremental investments, according to consulting firm Oliver Wyman (2021). The proving ground in adopting these technologies to transit the global economy from fossil-fuel driven to net-zero emissions will largely be industrial areas in Special Economic Zones (SEZs). This write-up aims to create awareness among Asian Infrastructure Investment Bank (AIIB) Members, stakeholders and general public on investment opportunities in Special Economic Zones, identify alignment with AIIB’s promoted sectors and advocating approaches to enter this market.

At end-2021, Indonesian authorities announced the construction of what it claimed was “the world’s largest ‘green’ industrial park in Bulungan, Kalimantan.”1 The Suez Canal Authority, which oversees one of the world’s busiest maritime trade canals in Egypt, unveiled its developmental strategy, earmarking two out of seven pillars as more coordinated development of its industrial/logistics zones with diversified investments.2 In India, the Modi administration revealed plans to replace its 2006 SEZ Act with new legislation that allows larger state participation with the aim of optimizing available infrastructure, promoting ease of doing business and enhancing competitiveness of exports.3 A trend appears to be developing where AIIB’s fast-growing Members are exiting the post-pandemic economic slump with SEZs as one of the key growth drivers.

In recent years, SEZs are being positioned as a platform to access greater global value chain participation. The World Investment Report (2019) estimates that 147 economies, largely developing countries, have adopted over 5,300 zones to achieve industrial development and economic transformation.

Although the United Nations Industrial Development Organization (UNIDO), the World Bank and the Asian Development Bank (ADB)4 each have their own definitions of an SEZ, what is common to these definitions is that SEZs are government-designated, export-oriented industrial areas, normally packaged with certain incentives (e.g., free zone, tax incentives) and administered by a single body. An ADB typology diagram best encapsulates the multiple options that stem from this definition of what is essentially an industrial area (Figure). AIIB’s Sustainable Cities Strategy recognizes integrated zonal development as one of four priority investment areas. 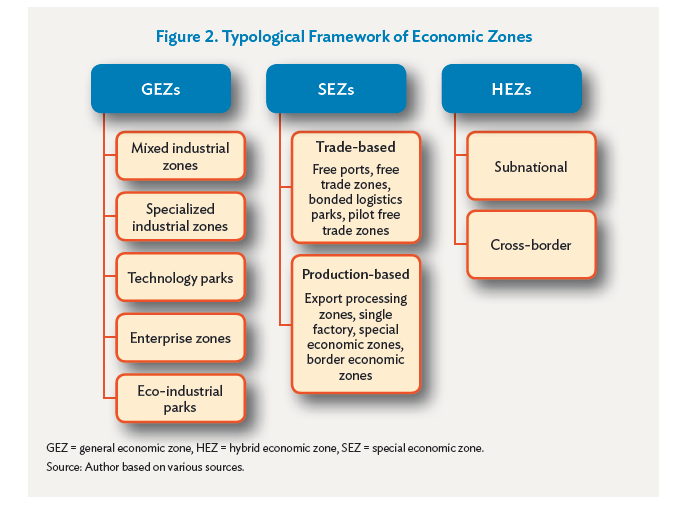 Another notable trend since the early 2000s has been the growing number of zones administered and developed worldwide by the private sector. A World Bank study5 (2008) reported that over 60 percent of 2,301 zones in developing countries were private sector developed and operated. This is a big contrast from the 1980s where less than 25 percent of zones were owned and operated by the private sector. A main attraction to private investors in this infrastructure segment is awareness that the business model for zones can translate to profitability for developers. At the same time, the fiscal burden SEZs originally placed on government coffers can be minimized.

Oliver Wyman, in its World Economic Forum Report 2021,6 predicts that about USD50 trillion is required by 2050 to accelerate the global industrial adoption of breakthrough technologies, enabling the transition to net-zero emissions and potentially averting a major climate crisis. In line with its Green thematic priority, AIIB has set targets for its investment operations to be fully Paris-compliant by July 1, 2023 and climate financing to reach at least 50 percent of its total annual commitments by 2025. In this climate investment space, McKinsey (2022) has identified industrial processes, buildings, land use and waste management as direct sources of global emissions requiring urgent systemic changes. In the context of industrial activities in the zones, industries ranging from steel, cement, chemical production to refining of gas and waste/waste-water treatment, generate about 60 percent of CO2 emissions. Steel and cement together contribute to about 14 percent of global CO2 emissions and 47 percent of industry’s CO2 emissions.

Given these trends and commitments, here are four areas AIIB may consider, to ramp up investments and secure new climate-aligned project pipeline sources in this space:

Approach 1: Participate selectively in regional economic zone platforms. Regional groupings such as the Central Asia Regional Economic Cooperation Program (CAREC), the Greater Mekong Subregion (GMS), and the Indonesia-Malaysia-Thailand Growth Triangle (IMT-GT) have set up working groups to enhance cross-border production networks using SEZs as key tools. The GMS for example, has attracted over USD20 billion of investments in mainly the transport and energy sectors while CAREC has drawn in USD11 billion since their inceptions.7 Post-pandemic plans are under way to create more transport, economic corridors aimed at stimulating trade, boosting supply chains, regenerating jobs, beefing up exports and attracting foreign investments. From a cross-border perspective, these initiatives also aim to generate network externalities via regional co-operation. Such platforms provide conducive avenues for AIIB to establish its market position and to network among policymakers and private sponsors.

Approach 2: Mobilize project preparation resources for SEZs. To add value to AIIB’s prospective participation in the above regional platforms, AIIB can now support its clients through a range of technical assistance resources beyond the Project Preparation Special Fund. AIIB received approval from the Multilateral Cooperation Center for Development Finance (MCDF) in December 2021 for a grant to provide capacity-building support to the Government of Cambodia to develop its first comprehensive masterplan for its Sihanoukville Special Economic Zone. The masterplan, once completed, is expected to reveal several major infrastructural project-level opportunities that AIIB and other financial partners can help prepare and finance. AIIB could also seek funding from the Global Infrastructure Facility to structure financial transactions and mechanisms that co-opt private sector funding in this domain. Leveraging these project preparation facilities will enable AIIB to build its own project pipeline in a relatively new business segment.

Approach 3: Seize private sector investment opportunities in four key industrial areas. As highlighted earlier, there exist sustainable and innovative business models for private funding in this space, and this will be accentuated as governments worldwide unwind fiscal stimulus measures. Opportunities abound to invest in infrastructure that decarbonize systems and processes, shift the energy mix away from fossil fuels, increase energy efficiency and utilize the circular economy. In this respect, McKinsey8 (2018) further illustrated these opportunities by identifying four key industrial sectors in urgent need of decarbonization: cement, steel, ammonia and ethylene. The report further called on governments, financial institutions and multilateral development banks to play a catalytic role by pairing regulations, incentives and financing that support decarbonization roadmaps of these sectors.

Approach 4: “Green” hydrogen and ammonia are promising investment areas. The use of hydrogen is pervasive in industries. Among its major uses are to process oil in refineries, produce methanol for use in plastics, and help produce almost all the world’s industrial ammonia. Ammonia is the key ingredient in artificial fertilizers which account for a large portion of the world’s crop yields. Morgan Stanley predicts that the hydrogen market is likely to grow more than five-fold to over 500 million tonnes by 2050.9 Bloomberg NEF10 opines that, based on a survey, the elevated and sustained energy prices worldwide, partly driven by the Russia-Ukraine conflict, have indirectly contributed toward “green” hydrogen (derived from renewable energy) and ammonia being more competitive, compared with unabated natural-gas based processes, even without a carbon price mechanism. Infrastructure for “green” hydrogen and ammonia are promising, new sectoral themes for investments, aside from existing pipeline projects in electric vehicles and solar panels under AIIB’s “Other Productive Sectors” window.

In conclusion, policymakers across the world, especially in emerging economies, continue to pin their hopes on SEZs to jumpstart their economic recoveries with more innovative designs, features, incentives and greater private sector participation. Therein lies a huge investment gap for financiers like AIIB to seize and hence catalyze an Asian industrial transition to net-zero.