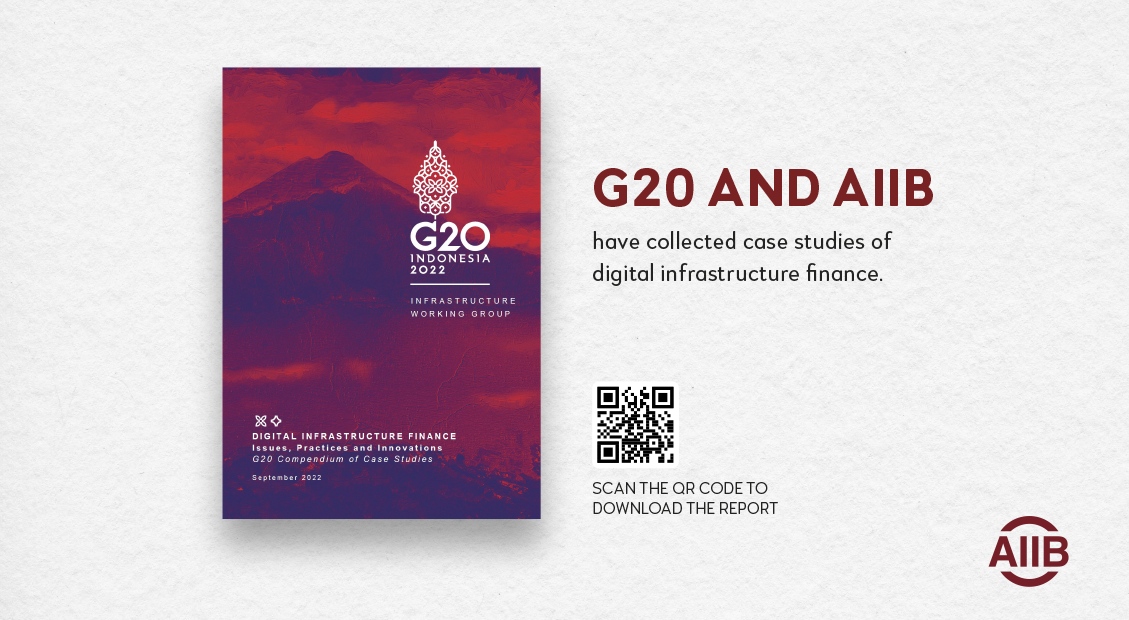 The compendium was produced by the Asian Infrastructure Investment Bank (AIIB) upon the request of the G20 Indonesia Presidency to share the Bank’s expertise on what constitutes innovation in digital infrastructure finance. AIIB launched the report during the 4th Infrastructure Working Group Meeting on September 15, 2022.

During the FMCBG meeting, chair Minister Sri Mulyani highlighted how the compendium is a valuable tool for the G20 in developing future investment on digital infrastructure.

As an institution established in the digital era, AIIB plans to play a major role in supporting clients transform their infrastructure sectors, including health and education infrastructure, by digital means and through technological applications. We sat down with the AIIB team that spearheaded the production of the compendium to talk more about the key findings of the analysis of the compiled case studies.

Q: What is the digital infrastructure context?

A: Over the past 20 years, market dynamics have shifted radically with a rebalancing of the roles between the public and the private sectors. The infrastructure supply now responds directly to technological advances in the mobile handset market, and not overly to the universal access objectives of governments. This situation has led governments to address complex market failures, with limited public resources. This change of context has led developers and investors to rely on different financing tools. We’ve seen how important digital infrastructure is during the coronavirus disease (COVID-19) crisis. Demand soared across the world, and regions where there was poor digital infrastructure were left vulnerable. We found out that in 2021, up to 40 percent of the global population was unconnected. As the world slowly emerges from this global crisis, it has become undeniable that digital infrastructure is not only critical to the resilience of the global economy and a major driver of growth across the world, but even more importantly, a provider of social equity in the future.

Q: What does this compendium hope to achieve?

A: This compendium sampled case studies from multilateral development banks, including AIIB, international organizations (e.g., the European Commission), from governments and from the private sector to better understand developments in the financing mechanisms used for digital infrastructure. We hope that this compendium becomes a resource for those seeking ideas on how to facilitate the financing and development of cost-efficient and better-quality digital infrastructure and ultimately, help the G20 in narrowing the digital divide.

Q: The case studies you compiled cover a diverse range of regions, instruments, and objectives. How did you bring them together to come up with your key findings?

A: In this compendium, we wanted to highlight the current issues, practices and innovations in digital infrastructure. Each of the 10 cases we featured have their own context but we made sure to focus on elements that have the potential to be replicated even beyond their regional or project context. So, we identified those aspects of the cases, as well as some considerations when they will be replicated. We have also analyzed the common themes that we found in these cases.

Q: What are the key findings of the compendium?

A: These are the main issues that we found on digital infrastructure finance:

Q: What can be done about these findings?

A: The dissemination of the compendium will allow knowledge sharing on which financing techniques are used in successful projects and how resources can be best leveraged from public to private sources. Many of the financing features in the case studies are replicable beyond their regional or project context. We think that aside from governments and the private sector, multilateral banks play a critical role in helping achieve this. Banks like AIIB can use their capacity to promote financial innovation and mobilize more resources to the digital infrastructure sector.