Investing in Climate-Resilient Roads for a Better Tomorrow 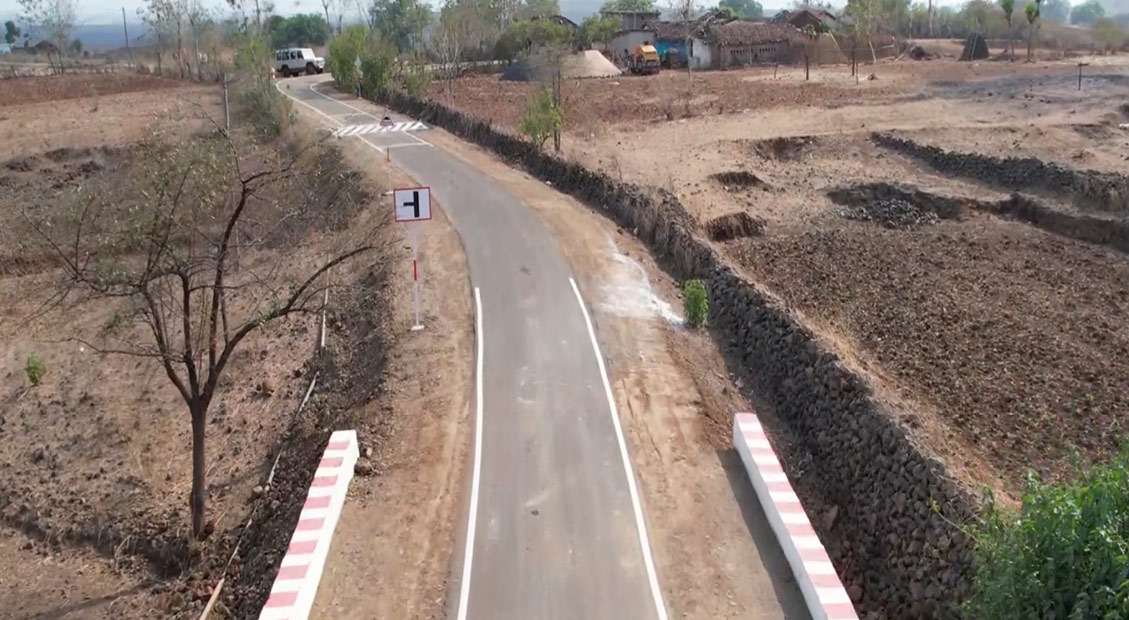 An example of an upgraded road in Madhya Pradesh in India. AIIB helps its clients build resilient Infrastructure for Tomorrow by considering climate change risks and incorporating adaptation measures into the project design.

Countries across the globe face a tough job of weathering a warmer world and designing a sustainable development pathway for their people. Against the backdrop of a warmer climate, countries have to deal with extreme temperature rise, increased rainfall intensity, flooding, extended summers and more severe droughts. These natural hazards have wrought significant damage all over the world. Over the last five decades, weather-related disasters resulted in some 800,000 deaths globally and more than USD1 trillion in economic losses.

Because of this, countries are taking great strides in adapting to a changing climate and developing resilient strategies that would help them withstand climate change shocks. These strategies include applying resilience measures to new and existing infrastructure that are not immune to climate change. Building climate-resilient infrastructure prepares countries for climate change shocks. It also fulfills their development objectives of providing economic and social opportunities for their people, especially the poor and vulnerable and creating inclusive and connected economies.

The Asian Infrastructure Investment Bank (AIIB) and the World Bank are helping India do just that with the Madhya Pradesh Rural Connectivity Road Project (MPRCP) approved in 2018. This project aims to improve the durability and accessibility and enhance the climate resilience of the gravel-surfaced rural roads in Madhya Pradesh.

These could have adverse impacts on Madhya Pradesh’s existing infrastructure, particularly its gravel-surfaced roads. This type of road is prone to washouts during flood seasons, even with moderate floods. 2.5 centimeters of gravel material is washed out in one rainy season. This means that in a 25-centimeter gravel road, 10 percent of road layer disappear. Extreme precipitation and flooding also cause soil erosion, preventing road access and contributing to further road deterioration. While construction costs for gravel roads are low, maintenance frequency and costs are high, especially when considering reliability and safety conditions. Gravel roads also represent a health and traffic safety hazard and also cause dust pollution. As a result, service providers such as public transport operators, schools, and hospitals are reluctant to bring vital services to small villages that have no all-weather paved roads, since it is too expensive to provide uninterrupted services. Thus, exposure to climatic events further exacerbates the accessibility issue in Madhya Pradesh, especially since it is a land-locked and predominantly rural (70 percent reside in rural areas) state that is hindered by poor infrastructure development. This constrains the state’s ability to accelerate sustainable growth for its rural population.

As the second most populous nation in the world, India has committed to improving climate resilience. India’s Nationally Determined Contribution (NDC) was submitted to the United Nations Framework Convention on Climate Change in October 2015, and revised and approved by the Cabinet in August 2022. The NDC is a commitment to better adapt to climate change through enhanced investments in vulnerable sectors, while also committing to reduce the emissions intensity of its gross domestic product (GDP) by 45 percent by 2030 from the 2005 level.

This is in line with AIIB's commitment to support countries in achieving their climate agenda. In fact, AIIB has set an ambitious target of climate finance reaching 50 percent of its annual approvals by 2025. Reflecting efforts to scale up adaptation finance, AIIB’s adaptation finance has more than tripled from USD145 million in 2020 to USD582 million in 2021.

As for the MPRCP, the following various elements were incorporated into its road design to address climate change risks: 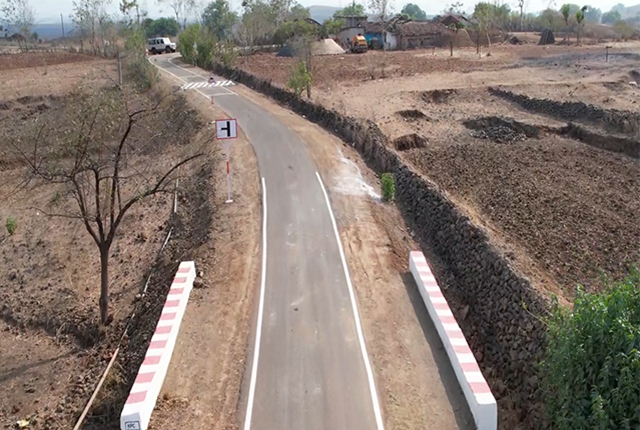 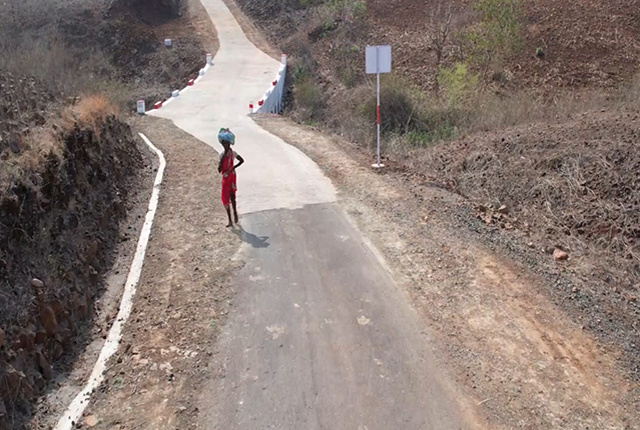 Left picture: Newly constructed submersible bridge with black topped road. Since the bridge is at a low height, cement concrete approaches have been constructed to save bituminous approaches. Right picture: Proper camber and shoulder maintained on both sides of the road.

Overall, the road design in the MPRCP follows that of the Pradhan Mantri Gram Sadak Yojana (PMGSY) program and meets the design life of rural roads of 10 years. PMGSY is a national rural connectivity program established in December 2000 designed to improve socioeconomic circumstances in rural areas by providing all-weather bituminous-surfaced road link to villages. A complementary project to MPRCP, it is also implemented by the Madhya Pradesh Rural Development Authority, the MPRCP’s implementing entity.

The Costs and Benefits of Climate Resilience

The MPRCP is proof that although the road to climate resilience will involve adaptation costs, they need not be expensive. The total financing for climate adaptive road designs in the MPRCP is only three percent of the total project cost.3 The climate adaptive designs employed are low-cost, nature-based, use locally available materials and provide work opportunities for local people.

As this project has also shown, the gains from incorporating climate-resilient designs in transport infrastructure projects outweigh the costs. One key benefit is lower road maintenance costs. Preliminary costs based on sample MPRCP roads show that the reduction in maintenance cost is approximately 25 percent for climate-proofed roads. Climate-proofed roads are less prone to early deterioration from exposure to higher temperatures, and submersion in flood waters, among others.

Meanwhile, the cost for the lack of road access tends to be indirect but significant. Increased travel time, higher fuel consumption and vehicle operating costs and greater social costs associated with communities’ limited access to essential services, missed employment and lost income are all possible effects of not having climate-resilient road infrastructure in place.

The road to climate resilience does not involve capital-intensive measures alone, but can and should also include non-structural measures. These soft measures include integrating climate information (temperature, precipitation, and hydrology projections) into system planning to assess climate impacts on road infrastructure; upgrading design standards and codes (e.g., using stronger building materials) and their implementation for both new construction and renovation. Measures can also include the development of guidelines for new and existing road investments that include climate-smart design considerations.

Careful planning and design as well as stakeholder engagement at the grassroots level is also an important part of the project design stage. Public consultation is a key prerequisite to ensure understanding of local needs and garnering village support. During the road planning stage of MPRCP, members of the panchayat (village council), teachers, Anganwadi (rural childcare center) workers, women and the elderly were all consulted so that they could offer suggestions on how to design an acceptable route. These discussions also included specific provisions for road safety, including speed regulation. Technically feasible suggestions have been implemented in the project.

As governments design their development trajectory in a warmer world, climate adaptation should be an affordable constant in building a resilient and sustainable infrastructure for tomorrow. AIIB will continue to support building resilience of vulnerable communities in Asia and ensure its infrastructure investments include adaptation measures that can help its members withstand frequent and ever-increasing severe climate conditions.

1 The gravel roads have been upgraded to thin bituminous surfaced standard (20 millimeters [mm]) overlain on a prime coat or tack coat with suitable sub-base course (125/150 mm) and base course (150 mm).
2 According to the Indian Road Congress (IRC) rules and guidelines, the recommended values of camber or slope of the road for national and state highway bituminous or cement concrete road or pavement varies between 1.7 percent and 2 percent (1 in 60 to 1 in 50) according to heavy and light rainfall areas.
3 This is based on a sample of 100 MPRCP roads geographically spread over all districts in Madhya Pradesh.