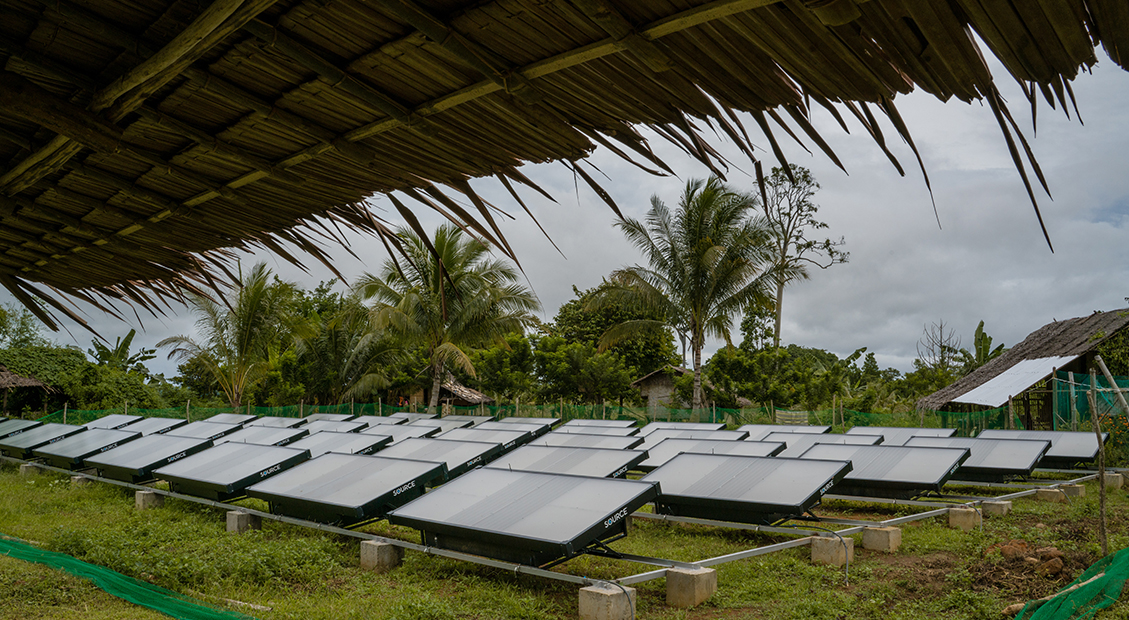 A project in Timor-Leste using solar technology to harvest moisture from the air and convert it to drinking water, funded by Lightsmith, a financing partner of AIIB
Photo © Source Global 2020

The Asian Infrastructure Investment Bank’s (AIIB’s) mission is to finance Infrastructure for Tomorrow (i4t), which unlocks new capital and technologies while creating new ways to address climate change and connect Asia with the rest of the world. i4t reflects AIIB’s firm commitment to sustainability in several ways:

Asia’s ability to achieve a sustainable development pathway utilizing i4t will be an important contributing factor toward achieving the Paris Agreement objectives.

Consistent with those objectives, climate finance has become increasingly important to multilateral development banks (MDBs). By 2018, MDB-sourced climate finance in developing countries and emerging economies had already reached record levels, with approximately USD111 billion of combined climate finance and cofinancing that year. In 2019, nine MDBs announced their intention to increase annual support for global climate action investments to USD175 billion by 2025.2 In 2020, MDBs supported a total of USD66 billion toward that objective, of which 58 percent (or USD38 billion) was committed to low- and middle-income economies.3

In 2020, AIIB President Jin declared that AIIB would not finance any coal-fired power plants or projects functionally related to coal, such as the roads leading to a plant or transmission lines serving coal power. That same year, the Bank declared its ambition to make climate finance 50 percent of its total financing approvals by 2025 (climate finance accounted for 41 percent in 2020).

Also in 2020, AIIB launched the AIIB-Amundi Climate Change Investment Framework with French asset manager Amundi AMUN.PA, whose objective is to speed up the transition to a low-carbon economy through the capital markets. The framework allows investors to analyze climate risks with investment opportunities by translating the three objectives of the Paris Agreement—mitigation, adaptation and transition—into fundamental metrics. Most private sector investors either purchase thematic equity funds that do not address all sectors or invest in low-carbon index funds which focus only on mitigation.4 Given that Asia has an estimated USD1.7 trillion annual infrastructure financing gap,5 building sustainable infrastructure and promoting intraregional collaboration are more important than ever before.

The tripartite challenges of coping with climate change while at the same time promoting development and enhancing regional connectivity is made somewhat easier because the global investment environment has never been better for climate investments. Apart from the existence of the Paris Agreement and the Tackling Climate Change Goals 13, numerous countries have contributed to political leadership on climate action and net zero targets are well established for some developed countries.

Carbon taxes and emission trading schemes have contributed toward tilting the market toward green investments, the cost of clean technologies have fallen sharply in recent years and there is an enabling regulatory and market environment for scaling up climate finance. Climate finance is a natural investment sector for AIIB to focus on as an infrastructure investment bank. Its sectoral and geographical foci are well aligned with the climate finance needs of Asia, in which six of the 10 nations most affected by extreme weather events are located. Also, some 60 percent of the region’s population work in sectors prone to climate risks. A variety of Asian countries already have established credentials as leaders in clean energy generation.

AIIB’s loans and investments are already playing a role in expanding the marketplace for renewable energy and in changing the narrative about the importance of sustainable development. The seriousness with which it is pursuing its climate finance goal for 2025 is similarly indicative of the Bank’s green credentials. AIIB will continue to bolster its position as a leading source of climate finance in Asia.

This article first appeared in the Berne Union’s July 2021 Newsletter.