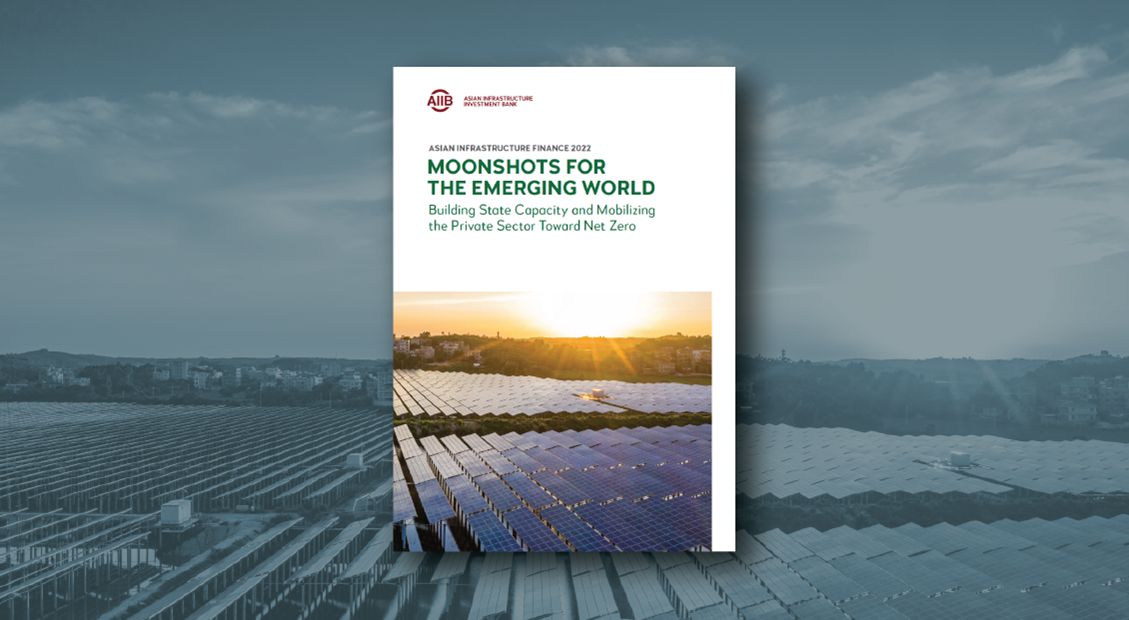 Emerging and developing economies (EMDEs) are at risk of being left behind by the net-zero transition unless urgent action is taken to build state capacity in conjunction with the private sector, according to a report published today by the Asian Infrastructure Investment Bank (AIIB).

The Asian Infrastructure Finance 2022 report, ‘Moonshots for the Emerging World: Building State Capacity and Mobilizing the Private Sector Toward Net Zero’, identifies the net-zero transition as a “moonshot” – a once-in-a-lifetime opportunity that will require mission-driven industrial policy across economies globally. It calls for better deployment of existing state capacity, and the development of fresh capacity, to accelerate green innovation and adoption of new technologies.

Specifically, the move toward decarbonization requires a significant shift away from the business-as-usual path. Challenges mainly lie on two fronts: first, bringing the actors together who adapt and evolve for the common cause, which will require moonshots toward innovations, technology, capacity building, etc.; second, developing the financial system to suit the immense investment needs during the transition process by facilitating innovative products and services.

According to the report, 74% of countries with public commitments to long-term climate strategies have high state capacity, compared to 37% among countries without long-term strategies. Data suggests that countries such as Tonga and Viet Nam, which have high state capacity, have the potential to undertake more climate action in the short-run and invest in long-term planning. On the other hand, vulnerable and low-capacity states would benefit from concerted support to build adaptive capacity alongside their development of climate strategies.

The report reveals an urgent need for a smooth and fair transition led by state-owned enterprises (SOEs), state-owned financial institutions (SOFIs) and private-public partnerships (PPPs). It argues that state-owned institutions must go “from laggards to leaders” in the net-zero transition, noting that SOEs and SOFIs have an outsized carbon footprint. Ultimately, the findings show that governments must strengthen and enforce the net-zero mandates of these institutions, to accelerate the phasing out of fossil fuel assets; put their financial capability to good use by investing in green infrastructure; and actively foster green innovation, as well as green technology adoption across value chains.

Jin Liqun, AIIB President, said: “This year’s Asian Infrastructure Finance report surfaces uncomfortable realities, detailing the outstanding gaps that must be overcome to reach net zero, and identifying the opportunities available to the international community for doing so. For the globe to reach carbon neutrality, governments must use every tool at their disposal including, critically, effective engagement with the private sector. The sustainability of our global economy depends on an unswerving commitment from all members of the international community.”

Public-private partnerships are identified as a vital, but still an imperfect tool for the development of green infrastructure. The share of PPP investments in Asia specifically has grown quickly – from two-fifths in 2000 to nearly two-thirds in 2021 – but the large economies of China and India account for 50% of that investment in Asia.

The report concludes that averting a climate disaster by reaching net zero by 2060 will be the greatest challenge for state capacity to date. As such, the global community has a responsibility to make green technologies available to emerging and developing economies and provide financial support for their acquisition and absorption.

AIIB’s Chief Economist, Erik Berglof, who led the report, added: “Our report sets out the immense challenge that lies before us – namely, building climate resilience for what could potentially be a chaotic transition to net zero, with very unequal outcomes within and across countries.

“The net-zero transition should be conceived of as a moonshot that seeks to address fundamental societal challenges. Multilateral development banks will be integral to this transition.”