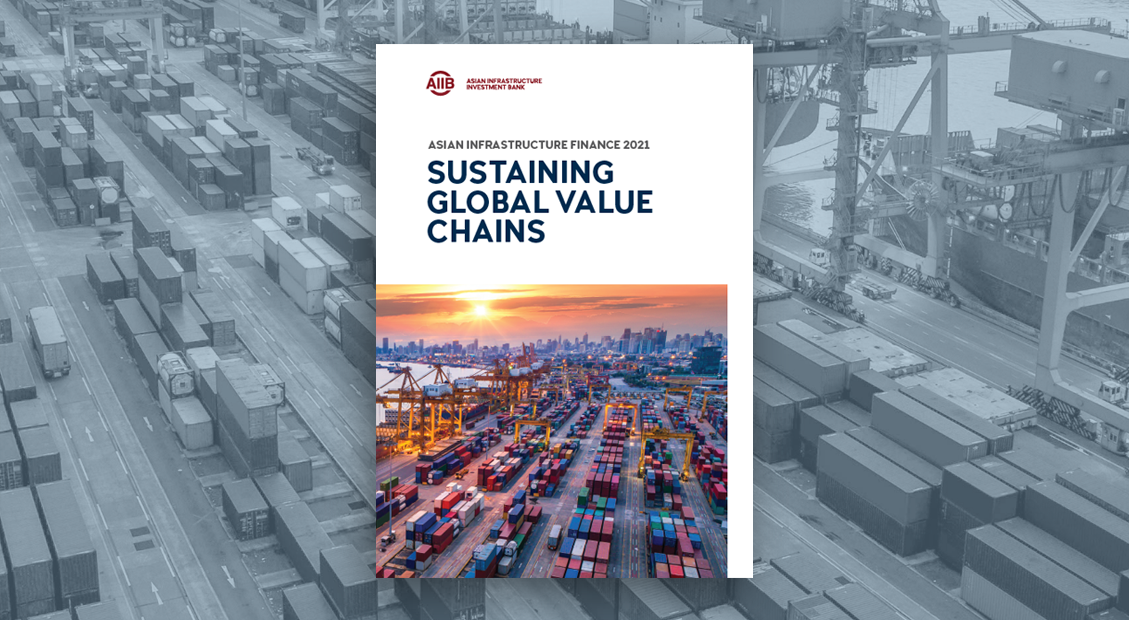 As the world grapples with supply chain disruptions brought about by the pandemic, the Asian Infrastructure Investment Bank (AIIB) has highlighted the need for inclusive and green infrastructure for global value chains (GVCs) to meet fundamental challenges, including the net zero transition.

In its latest Asian Infrastructure Finance (AIF) report entitled “Sustaining Global Value Chains,” AIIB highlights the role and evolution of GVCs and the urgent shifts necessary to decarbonize along the supply chain or risk the GVC becoming unsustainable.

With GVCs accounting for 50 percent of global exports, the AIF 2021 report highlights the key role infrastructure development and supportive policies play in economic development. Yet there is an urgent need for GVCs to become more resilient and inclusive, and meet the net zero challenge. Companies and countries that fail to curb emissions as value chain scrutiny increases could be left behind, inhibiting economic development and raising the risk of long-term trade disruptions.

The report also points to the need for greater international cooperation to ensure the supply chain infrastructure is greener, more digital and more resilient. Another key aspect is the central role locational “green comparative advantage” is likely to play in GVC decision making in the coming years as all forms of production transit toward net zero.

“The pandemic has reminded us of the importance of GVCs for the world economy, particularly for emerging and developing economies, as they try to climb the value-added ladder and bridge the gap in prosperity to advanced economies,” said AIIB Chief Economist Erik Berglof at the launch of the report during AIIB’s 2021 Annual Meeting. “More critically, it has also put the spotlight on the potential role GVCs can play in accelerating the net zero transition across countries and sectors. If we allow any region to fail to achieve the Paris goals, we can expect climate-related emergencies to increasingly disrupt the functioning of GVCs and make the current chaos a permanent feature of the world economy. Collaboration and multilateralism are key to harnessing this opportunity and failure is not an option if the world is to achieve its net zero goals.”

Recognizing that participation in GVCs tends to be even more significant for lower-income countries and the centrality of Asian economies in some of the world’s most carbon-intensive supply chains including food, construction, fashion, fast moving consumer goods, electronics, auto and freight, AIIB is working to scale up green infrastructure investment—including in transport electrification projects, a sizeable renewable energy portfolio and through its sustainable capital markets engagement—to fulfil the region’s potential as an engine of the transition.

Along with the other multilateral development banks (MDB), AIIB also announced this week it is taking steps to align its project selection framework with the Paris Agreement by 2023, based on the methodology agreed among the MDBs.

“The ingenuity of GVCs is to allow each production step to be shored to a location with the greatest relative advantage, before coming together for the final product,” added Jang Ping Thia, AIIB Lead Economist and Manager, Economics Department. “This is the source of its tremendous economic efficiency. Countries with public policies that support sustainable infrastructure investment, industrial development and net zero transition have the opportunity to improve their competitive advantage and attract GVCs. The race toward sustainable GVCs has begun.”