MDBs and the Project Finance Challenge 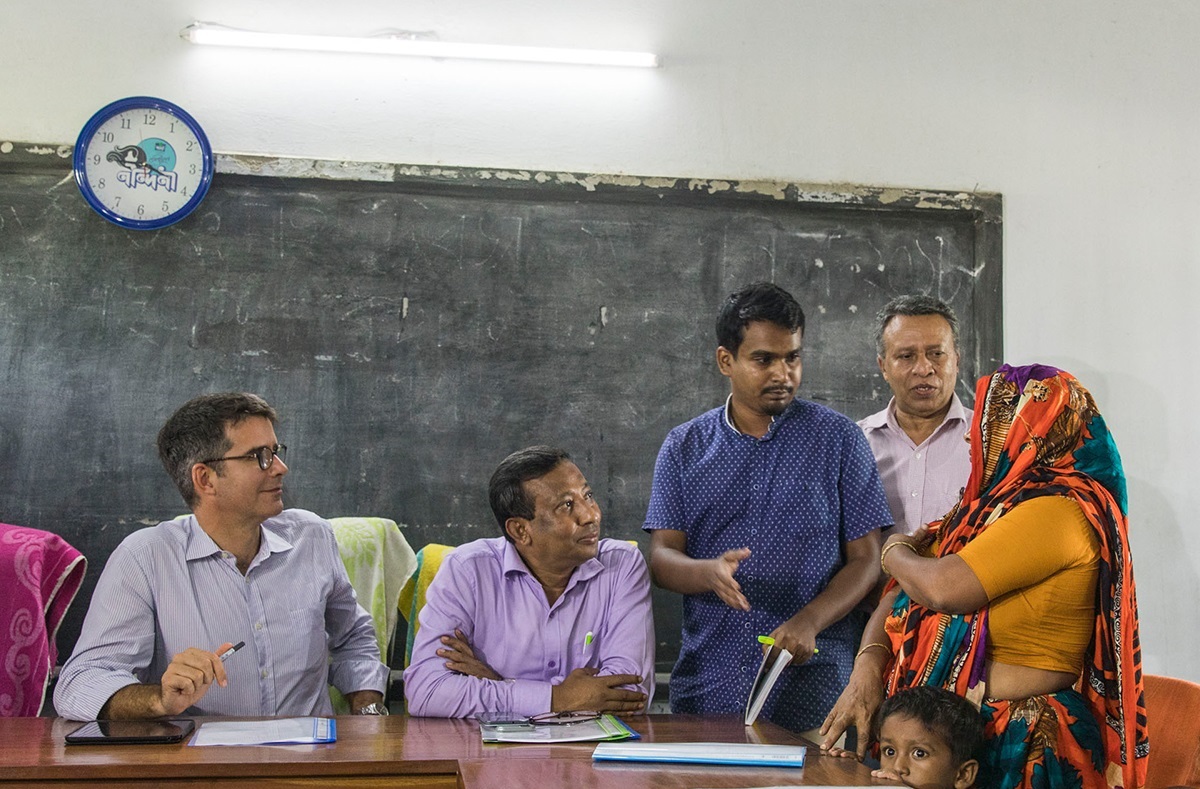 Members of the AIIB Board of Directors consult with local communities during a visit to the Bangladesh Distribution System Upgrade and Expansion Project site in September 2018.

Typical project financing involves the issuance of a nonrecourse loan, wherein the sponsor has no obligation to make payments on the project loan if revenues generated by the project are insufficient to cover the principal and interest payments. Lenders seek to minimize risks associated with making nonrecourse loans by requiring indirect credit supports in the form of guarantees, warranties and other covenants from the sponsor, its affiliates or other third parties involved in the project. Political Risk Insurance (PRI), which protects a sponsor or lender against noncommercial risks (such as expropriation, currency inconvertibility/nontransfer, political violence or breach of contract) is often utilized to remove country risk from the equation. Project sponsors and lenders thereby assume the commercial risks associated with a given project.

Project financiers have had to balance their desire to participate in sound, profitable business ventures, with the needs and capabilities of the people and governments of developing countries, as well as the interests of nongovernmental organizations (NGOs). This has been a slippery slope for many in the project finance business. Project sponsors, financiers and insurers alike have had to find a balance between the many competing forces that impact the construction and operation of infrastructure projects in the developing world. Their need and desire to adhere to strict credit, accounting, design, construction and operational standards has often conflicted with equally important objectives such as strict environmental compliance, greater socioeconomic benefits for workers and the rights of indigenous peoples.

Until about 20 years ago, project sponsors, lenders and insurers did not pay sufficient attention to these issues. Before nonrecourse project finance came about in the early 1990s, the emphasis tended to be on how to get an important project in a difficult country funded, rather than how to do so in a manner consistent with the objectives of all parties involved. What project financiers often did not appreciate was that it was in their interest to create a win-win environment with the governments and people of the developing world.

The project finance industry as a whole (which includes sponsors and PRI providers) has come to realize that it is in their interest that:

What is perhaps most important is that a project does not contribute to or accentuate perceived imbalances between ethnic groups, social classes or geographical subregions. Particularly in areas where conflict exists, extra attention needs to be paid to ensure transparency in all aspects of project implementation.

“Social responsibility” has become an integral part of the planning and implementation of infrastructure projects since the 1980s. There are now 117 financial institutions in 37 countries that operate according to the Equator Principles, which accounts for 70+ percent of international project finance in emerging markets. That said, project sponsors, financiers and insurers have learned some tough lessons about the dangers of not paying sufficient attention to these issues. It takes consistent and ongoing resources and effort to evaluate, monitor and adjust for the many moving parts that sustainable investing requires.

As an example of how this can and should be done in practice, many mining companies have subsequently made great strides in taking the initiative to avoid conflict with NGOs and indigenous peoples by taking care to be inclusive in the planning, construction and operation of mines. Some mining companies, for example, have spent a great deal of time establishing strong relationships with tribal leaders, understanding the concerns of local inhabitants and negotiating a sensible agreement with governments. It is in all parties' interest to collaborate in achieving mutually satisfactory guidelines for the construction and operation of infrastructure projects in the developing world. It is only through cooperation and collaboration that the objectives of all parties can be reached.

Multilateral development banks (MDBs) have a unique role to play in this regard. Since their work is by nature oriented toward promotion of development and the alleviation of poverty, the concept of social responsibility strikes a familiar chord. MDBs have strict covenants governing all aspects of their participation in project finance. From a “no child labor” policy to a requirement for total transparency to no tolerance for bribery and corruption, MDBs have played a pivotal role in ensuring that social responsibility is a common theme in the projects in which they become engaged. Many private sector banks and insurers have attained a surprising degree of convergence with MDBs in the general area of social responsibility.

The type of due diligence that is currently applied by most private sector institutions has achieved a remarkable degree of similarity with those of MDBs. In some cases, private sector-MDB cooperation has arisen where mutual interests intersect. For example, the Asian Infrastructure Investment Bank (AIIB) Asia Climate Bond Portfolio applies the AIIB-Amundi Climate Change Investment Framework. The Framework translates the three key objectives of the Paris Accord into fundamental metrics essential for investors to select “climate champions.” The assumption is that these policy actions will incentivize climate “winners” and/or disincentivize investors deemed to be climate “losers.” If broadly adopted, the Framework will encourage the financial markets to do their part to support the Accord’s climate goals.

While public sector insurers have, for example, addressed a host of developmental and social responsibility issues in the natural course of conducting their project risk analyses, many private banks and insurance companies now routinely address the same issues during their due diligence process.

In determining whether a project is worth supporting, for example, it is now common to assess the degree to which substantial tax revenues are generated, local workers are hired and technology transfer is present. Banks and insurance companies face a host of performance, reputation and ethics issues when engaging in project finance, particularly now that there is emphasis on corporate governance. PRI providers in particular have moved from making “traditional” assessments of country risk based largely on the social context in which a project operates to better understanding the degree to which infrastructure projects impact the wider geographical area and contribute to indigenous and cross-border conflict. This is particularly important because so much foreign direct investment in the developing world exists in areas that are inherently politically unstable. Promoting corporate social responsibility is therefore an underlying, albeit indirect, objective of PRI providers.

Despite the great progress made in the convergence of public and private PRI providers’ interests, there remains a need for even greater collaboration with respect to information gathering and sharing. MDBs and export credit agencies have a distinct advantage in collecting project-related information because they have access to sources that private sector entities do not have. For example, the Multilateral Investment Guarantee Agency has access to the International Monetary Fund and World Bank Group data and the Development Finance Corporation can similarly access any number of information sources from within the US government. Similarly, information gathered from local sources by private sector institutions could prove to be extremely valuable to MDBs.

All such institutions could benefit from greater adherence to widely acknowledged guiding principles, such as the Organization for Economic Cooperation and Development’s Guidelines for Multinational Enterprises, or those of the United Nation’s Global Compact Conflict Dialogue. Enhanced information sharing and the establishment of greater commonalities in project assessment and operational safeguards will contribute to a higher degree of conflict avoidance in the project finance process.

Private sector sponsors, financiers and insurers of project finance-related infrastructure projects should be given credit for having moved solidly in the direction of corporate social responsibility. It is clearly in the interests of all parties involved in the development process that the maximum amount of attention be paid to promoting social responsibility and to minimizing the potential for conflict.

Yet much remains to be done. Greater information sharing is one important aspect to enhancing the risk assessment, which is key to being able to better predict where problems are likely to arise. Generating accurate risk assessments is critical to increasing the flow of foreign direct investment to the most difficult conflict-ridden areas of the globe. The problem is that the utter unpredictability of political events makes the creation of more accurate risk analyses even more difficult to produce.

MDBs can play a more effective role in supporting access to project finance during periods of crisis by improving the finance methodologies they use so that they can be quickly and economically introduced to new markets even before a crisis starts. They can focus on filling market gaps that might appear so that capital flows from private banks may remain open longer. MDBs can also consider using the least amount of intervention possible in times of crises, giving priority to financing tools that help private-to-private flows first. MDB intervention can and should occur in times of crisis, but only when the ordinary functioning of capital markets fails. This way, we avoid creating a future financial burden in crisis-ridden countries. The loans provided by MDBs must eventually be repaid.

Finally, increased adherence to principles of corporate social responsibility among all stakeholders in the project finance business will certainly minimize the extent to which such business aggravates conflict-prone locations. Increasingly, project financiers are insisting that adherence to such guidelines be a condition precedent to issuing loans to projects. Future conflict between project and local stakeholders can be anticipated and even neutralized by thoughtful planning. Projects managed by socially responsible sponsors, financiers and insurers are sure to prove to be the most profitable and stand the best chance of being conflict-free.