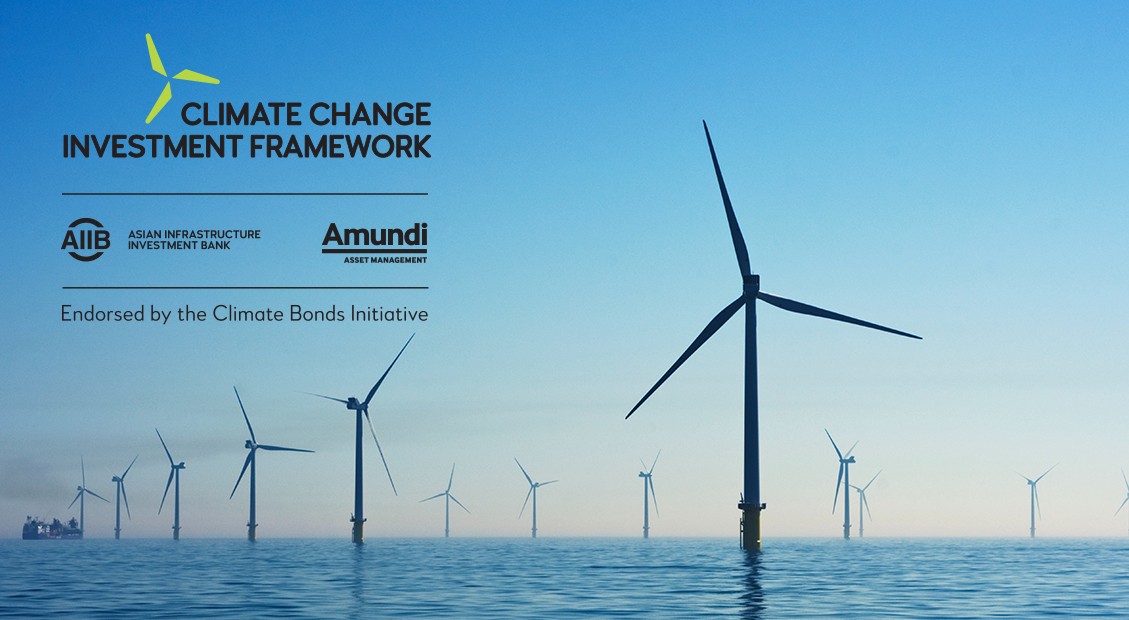 In August this year, the Intergovernmental Panel on Climate Change released the first contribution to the Sixth Assessment Report on Climate Change. The assessment which focused on the physical impacts of climate change, was sobering. To quote: It is unequivocal that human influence has warmed the atmosphere, ocean and land. Widespread and rapid changes in the atmosphere, ocean, cryosphere and biosphere have occurred.1 Add to this these key observations and projections: Since the late 1800s, the Earth’s temperature has risen roughly one degree, and since 1970, global warming has rapidly increased, as surface temperatures has risen faster than any other 50-year period over the past 2000 years. Given this alarming rate of temperature increase, the IPCC believes that even assuming aggressive global action is taken to lower emissions, temperatures are still projected to rise by 1.5C by 2040 and sea levels by 0.35m by 2050.

These statements and figures can be overwhelming. One way to understand these statistics is to view them in the context of what seems to be an endless cascade of recent extreme weather events such as floods, forest fires, heat waves and tropical storms. According to the IPCC report, under a one-degree warming level, a level at which Earth has already reached, a 10-year extreme weather event (i.e. an extreme weather event expected to occur once in ten years) is now 2.8 times more likely to occur, compared to a climate without human influence. Even worse, for a 50-year extreme weather event, an event that might recall scenes from a Hollywood disaster movie, the increased likelihood is 4.8 times.

Thus, what once appeared to be freak occurrences of weather events is now increasingly the norm. Once uncommon tail-end events are no longer low probability events. This is, alas, the “new normal” and it has never been more urgent to address the issue of climate change.

It is with this sense of urgency that AIIB and asset management company Amundi have developed a toolkit for investors to apply a climate framework to capital markets that is aligned with the Paris Agreement, the only international agreed legal framework that binds countries to reduce carbon emissions to address climate change.2 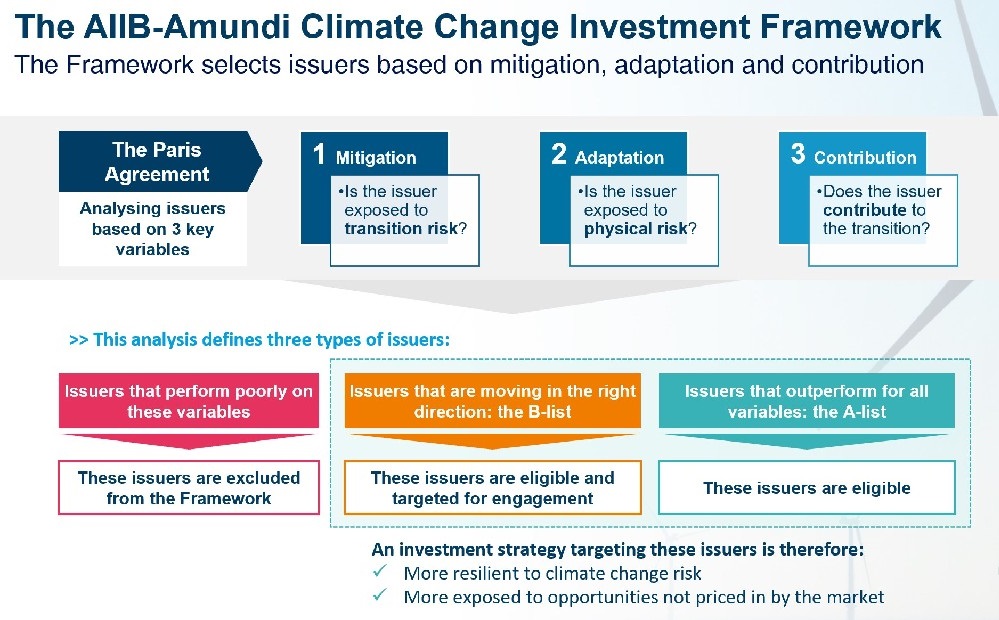 The second part is the Asia Climate Bond Portfolio, a USD500-million bond portfolio which is guided by the Framework, and thus provides a living case study of its application. This portfolio, managed by Amundi on behalf of AIIB, specifically invests in the bonds of infrastructure-related emerging market companies, favoring companies that do well on climate indicators and encouraging laggards to improve their performance.

The third part is a market development program that will develop more research on the AIIB-Amundi Climate Change Investment Framework. Here, AIIB has asked three leading climate finance research organizations—Fitch, Carbon Trust and the Climate Bonds Initiative—to test the application of the Framework to the analysis of sectors, companies and green bonds, respectively. The results of this research will be released in early 2022, but already we have a few interesting insights. 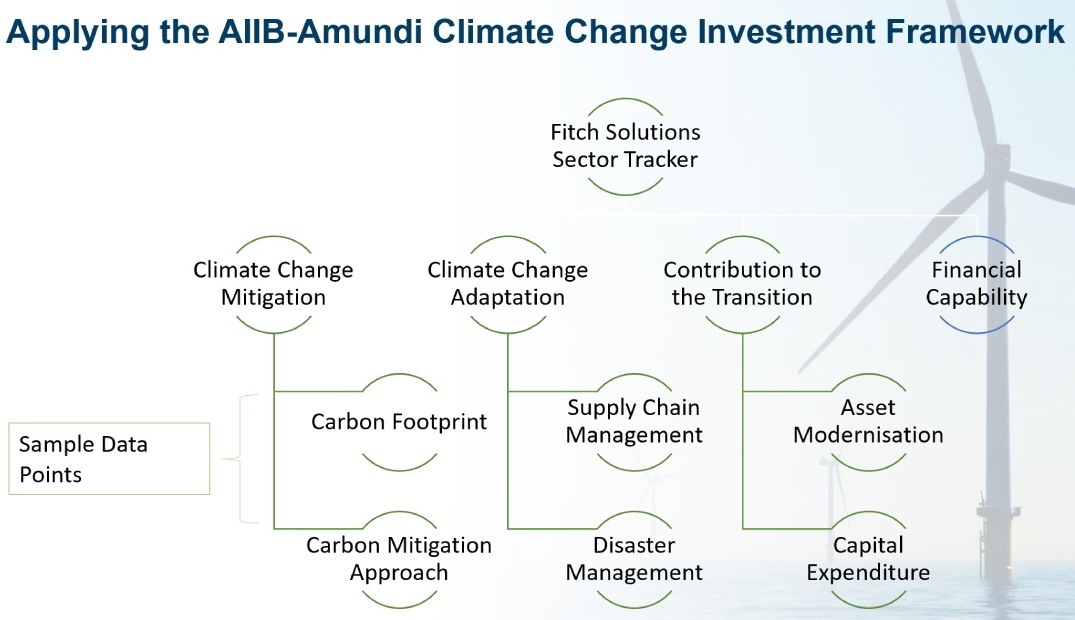 Fitch applied the Framework to the analysis of eight sectors in the emerging Asia region: energy, telecommunications, transport, utilities, healthcare, automotive, basic industries, and technology. It found that there were large variations in the availability of data on the three pillars of the Framework (mitigation, adaptation, and finance contribution). It also found that because more sectors had made efforts on mitigation, it was easier to quantify and score these efforts. In contrast, adaptation efforts have been slower, and because these efforts are more country- and location-specific and therefore largely subjective, Fitch found them more difficult to quantify, score and compare. Finally, Fitch found that a proper analysis of climate performance required adding financial capability as an additional Framework pillar.

Carbon Trust applied the Framework to the analysis of specific companies in the emerging Asia region. They found that Asian companies have made progress regarding mitigation of their direct emissions—such as by improving energy efficiency of their direct operations—but were at an early stage of addressing their indirect emissions—such as by adopting ultra-low emissions vehicle fleets for transportation and freight. They also found that companies have struggled to define their finance contribution to climate, due to a lack of a common definition around what constitutes “green”.

Finally, the Climate Bonds Initiative, which applied the framework to bond issuers, found that the Framework complimented the use of its Climate-Aligned Activity Taxonomy, which is used to identify credible labelled green bonds. For example, using the Framework was particularly useful in identifying untapped opportunities in unlabeled green bonds, by identifying issuers that were contributing to transition, based on analyzing the company’s green revenue streams.

All told, it appears the Framework held up well under scrutiny, but as the interim reading of the research suggests and the final research results may confirm, much more work will be needed fill in many of the gaps identified. These gaps relate to both actions that can be taken by companies and sectors to reduce their carbon emissions and to improve their climate resilience, but perhaps more importantly, gaps in how government policies might better encourage or favor greater overall climate performance. Both the recent extreme weather events and the latest IPCC report are wake-up calls to all to rise to the existential challenges posed by global warming and climate change. To this end, we would do well to heed the warnings of scientists to rapidly reduce our carbon emissions and to prepare for the physical effects of climate change. As adage goes, forewarned is forearmed, but we are forearmed only if we act beforehand.