Airport Infrastructure—Facing Delays but Can Recover 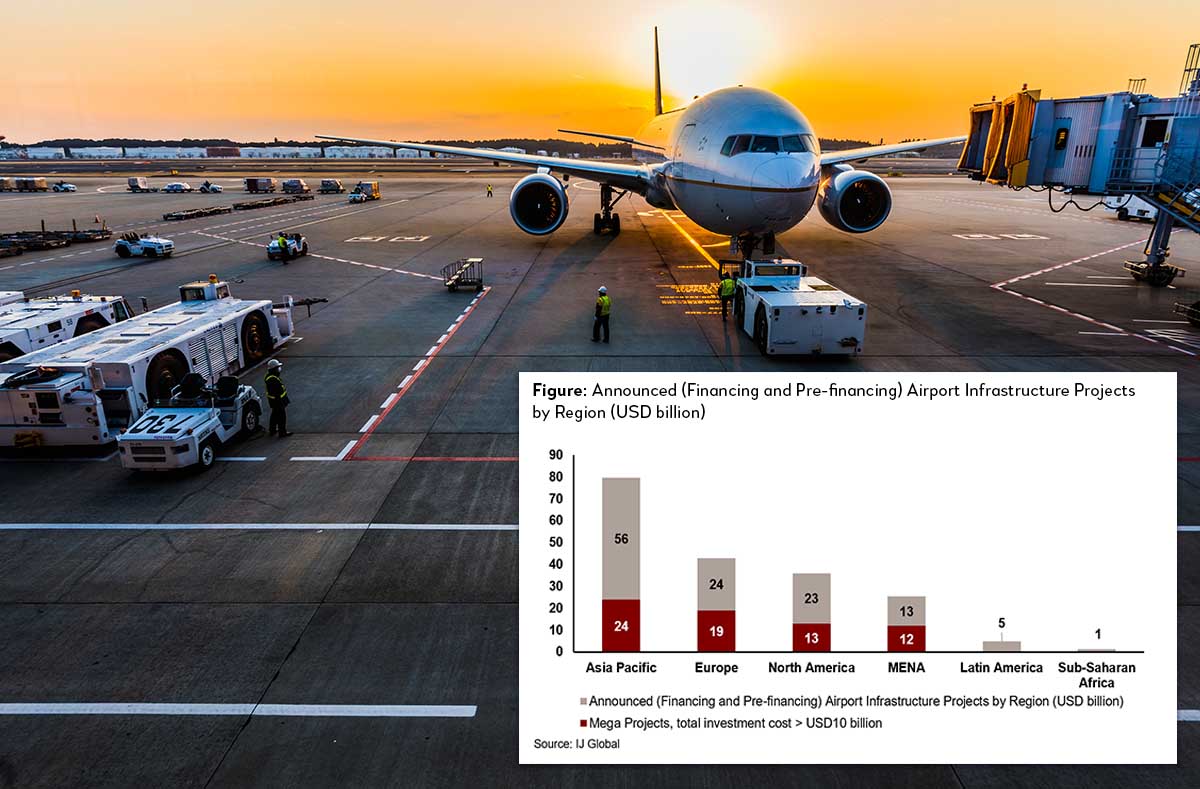 Effects of COVID-19 on Airport Infrastructure

The air transport sector has been one of the sectors most significantly affected by the COVID-19 pandemic, due to travel restrictions and lockdowns, and airports are likely to be the hardest hit infrastructure class. More than USD20 billion worth of airport infrastructure projects is at risk of delays as governments and investors may face difficulties in obtaining financing due to the ongoing health crisis and the impending global recession, and it will take the industry years to recover.

While some airport infrastructure projects no doubt would be continued, many will inevitably be delayed for years, rather than months, given the large financing needs and increased uncertainty about future profitability. As of March 2020, the value of announced airport projects (pre-financing and financing), ranging from those still at the stage of conception to those where financing is being arranged but not closed, amounted to USD122 billion. These comprise 59 recently announced airport infrastructure listed projects located all around the world, but primarily in the Asia Pacific and Europe, with five megaprojects accounting for more than 50 percent of the total investment volume (Figure).1

In this article, we mapped the announced airport projects to their sovereign credit ratings. Among the said 59 airport infrastructure projects, 31 are in countries that are either rated below or at risk of slipping below investment grade. Based on these criteria, we can estimate that projects worth as much as USD20 billion in countries with poor sovereign ratings could face potential financing difficulties. 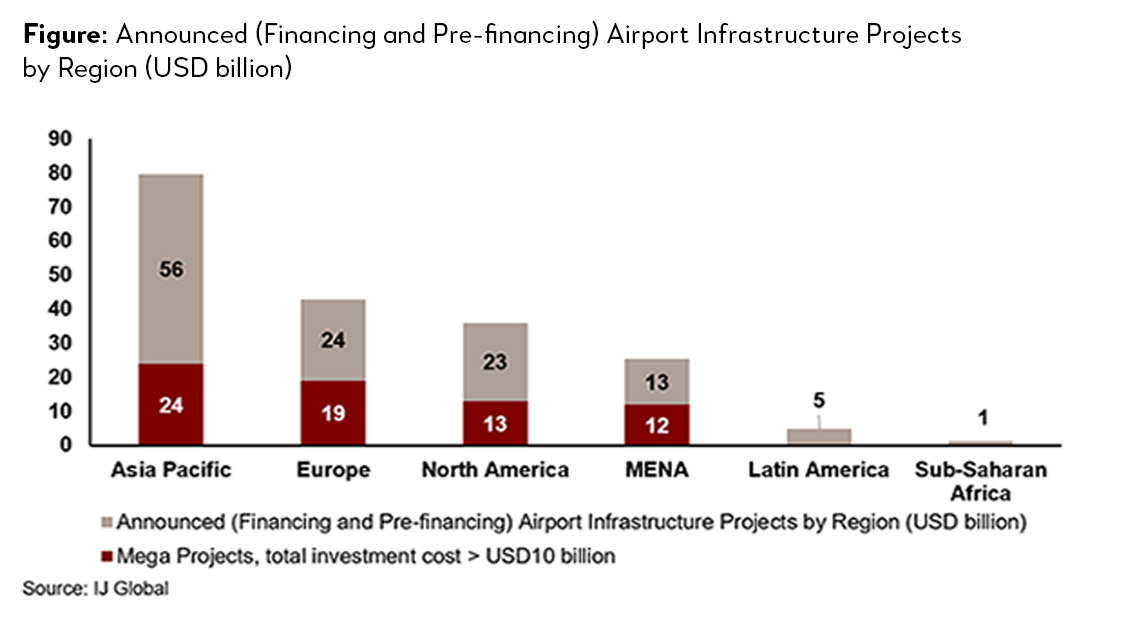 On the other hand, airports in developed economies are more likely to be owned by the private sector. Due to expectations of lower revenues, deterioration in liquidity, and weaker credit metrics, major credit rating agencies (S&P, Moody’s and Fitch) have recently undertaken to update corporate credit ratings of the world’s major airports resulting in credit downgrades of some of the world’s leading airports.

On Feb. 27, 2020, S&P downgraded France-based Aeroport de Paris’s credit rating by one notch to A, with the potential for further downgrades if the pandemic proves to be more severe and longer lasting than expected.2 In the following weeks, rating agencies continued downgrading the outlook for major airports. On March 20, several airports in Australia, New Zealand, India, the USA, and Europe were placed on negative watch. Soon after, Moody’s downgraded the Delhi International Airport Ltd’s corporate family rating from Ba2 to Ba33 with ratings placed on review for further downgrade. Fitch downgraded Russia’s Domodedovo International Airport from BB+ to BB with a negative outlook and has also taken rating actions on airport terminal projects located at New York’s John F. Kennedy International Airport, Terminal 1 Group, and placed on BBB+ negative watch.4

For airlines, the world’s leading economies have already announced various bailout packages to rescue the industry. From airline groups to aerospace manufacturers, many industry players made appeals to deal with low demand and higher expenses that have resulted from epidemic prevention measures. The response is necessary, but more state assistance could be needed.

What’s Next for Airport Infrastructure?

Travel demand remains healthy for the long run. This is still the most important anchor in framing any responses and helping policy makers navigate through this crisis. Airport projects are also long-lived assets. If the planned airport is underpinned by sound economics and not a white elephant to begin with, a delay by some months or even years will not make it a stranded asset.

Yet the crisis does mean the policy makers will have to re-examine the economic case for each project, especially those mega projects being planned, and the impact on financial and debt sustainability.

The vast majority of airports in developing economies will remain in public ownership for the foreseeable future, and the deteriorating investment credit rating of the governments and liquidity shortage will complicate access to finance for airport infrastructure projects. For projects that have been announced but not yet started, the key could be to review demand forecasts, build in more downside risks, and factor these into the capacity and design of airports. For projects that have already started and where financing is needed, more private financing may also be needed to ease the burden on public debts (e.g., partial privatization or evolution into a more public-private partnership structure).

For airport projects that are in private entities (mostly in developed economies), short-term public support may be required. In some sense, the crisis may bring about a convergence towards more public and private partnerships—recognizing that infrastructure like airports brings both large private and public benefits.