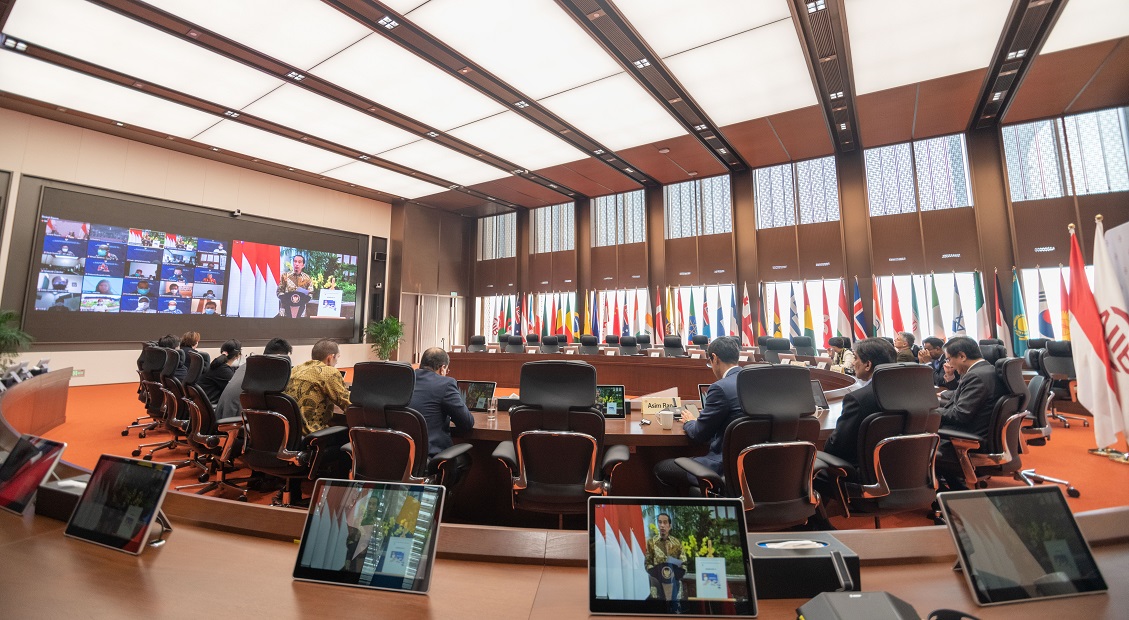 Asian Infrastructure Investment Bank (AIIB) President Jin Liqun attended a virtual ceremony on Feb. 26, 2021 to witness the completion of financing documents for the SMF Multifunctional Satellite Project, which was held in the Presidential Palace of Indonesia. President Joko Widodo of Indonesia also attended the ceremony.

The SMF Satellite Project is an initiative that will deliver internet connectivity to more than 149,000 public service points—including hospitals and schools—in the least developed, frontier and outermost regions of Indonesia. The project, which was approved by AIIB’s Board of Directors in September 2020, is the first telecommunication satellite public-private-partnership project in Indonesia.

It also marks AIIB’s first private sector financing in Indonesia and in the satellite industry. It is aligned with AIIB’s vision to support the efforts of AIIB Members in bridging the digital divide and increasing their economic competitiveness and infrastructure efficiency.

The project signifies the importance of multifunctional satellites as a fundamental fabric of digital connectivity. It will lead not only to development of a niche market in Indonesia but can also serve as a global case study and an example for countries that are working to provide digital connectivity in a sustainable manner.

Additional information about the Indonesia Multifunctional Satellite Public-Private-Partnership Project can be found here.

AIIB’s Membership in Africa Grows as Nigeria Joins the Bank

The Asian Infrastructure Investment Bank (AIIB) now has 11 members and nine prospective members from Africa after its Board of Governors approved the application of Nigeria to join the Bank.

AIIB to Fully Align with Paris Agreement Goals by Mid-2023

The Asian Infrastructure Investment Bank (AIIB) announced today that it will align its operations with the goals of the Paris Agreement by July 1, 2023.

Asian Infrastructure Investment Bank (AIIB) President and Chair of the Board Jin Liqun chaired the second 2021 meeting of the Heads of the Multilateral Development Banks (MDBs) on Oct. 20.