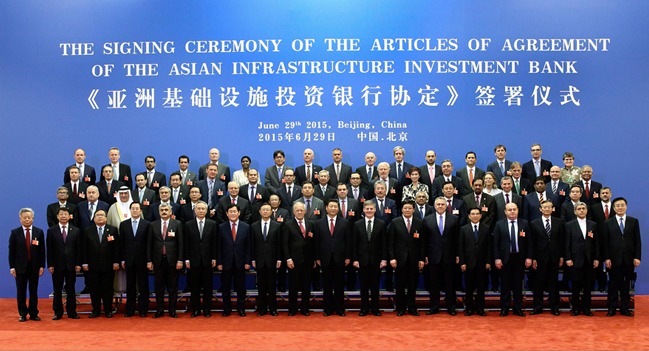 Chinese Premier Li Keqiang sent a written message of congratulations to Meeting Participants.
The AIIB grew from the recognition of the importance of infrastructure to the development of Asia and the need for significant additional long-term financing for infrastructure in the region. After the signing of a Memorandum of Understanding on Establishing the AIIB in October 2014,discussions on AIIB's charter among prospective members continued through Chief Negotiators' Meetings, culminating in the adoption of the final text of the Bank's Articles of Agreement by the 5th Chief Negotiators' Meeting in Singapore in on May 22, 2015.

The Bank, which will be headquartered in Beijing, will initially have an authorized capital stock of $100 billion. Reflecting regional character of the Bank, its regional members will be the majority shareholders, holding approximately 75 percent of shares. The Bank's foundation will be built on international best practices and the lessons and experiences of existing Multilateral Development Banks and the private sector. It is expected that the AIIB will be operational by the end of 2015.
Additional information on the AIIB, including its Articles of Agreement is available at http://www.aiib.org .